With the advancements in stereo technology today, most car stereos are now touch screen. It’s great to live in a time where this kind of technology is available to everyone! Unfortunately, this also means that there are a lot of low-value models that really aren’t worth your time.

"This site contains affiliate links to products. We may receive a commission for purchases made through these links."

In this guide, we will help you sift through the good and the bad to find the best touch screen car stereo for you and your car. Read on to learn all the characteristics you should be looking for in a stereo and to see some of our top recommendations.

Here’s a quick look at some of our favorites.

How to Choose the Right Touch Screen Car Stereo for You: A Guide for Beginners

As you can see, there many different types of car stereos to choose from and you can get almost as technical and fancy as you want when making your purchase. However, the goal of finding the best touch screen car stereo for you is to get one that matches your needs closest.

In this guide we’ll explain some of the most common terms, you’ll run into when car stereo shopping as well as help you figure out what features you truly need versus the ones that will just get in your way.

Choosing between a single DIN and double DIN car stereo is the very first choice you will have to make when purchasing your stereo. Luckily, this isn’t a matter of which is better or worse, but simply one of figuring out which type your car can accommodate. In other words, as long as you do your research, you won’t choose wrong one.

Many new touch screen car stereos, because of Bluetooth and USB connectivity, allow access to your phone’s navigation system and apps. Some even allow apps to be downloaded directly to your stereo for instant, hands-free access. We’ll go over more specific functions in our detailed reviews, but app access and navigation are two of the biggest advantages in touch screen stereo technology.

Simple enough, right? With this basic information, it will be easy to get your shopping started, but now we’ll take a closer look at the models from our table to help you find the best touch screen car stereo for you. 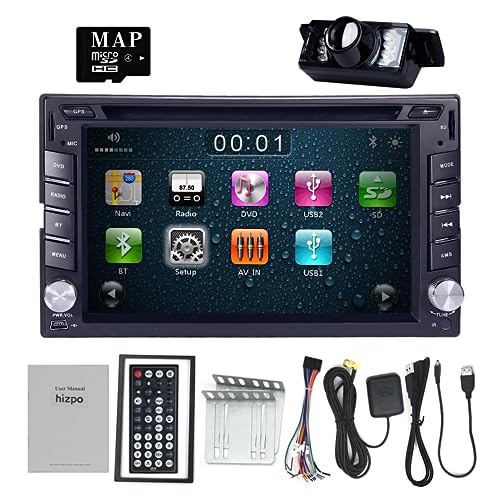 HIZPO may not be one of the most well-known car audio manufacturers, but we’ve found their double DIN touch screen car stereo to be one of the most versatile and user-friendly models available. It’s beautiful 6.2-inch display is the first feature you’ll notice, but it’s definitely not the last: 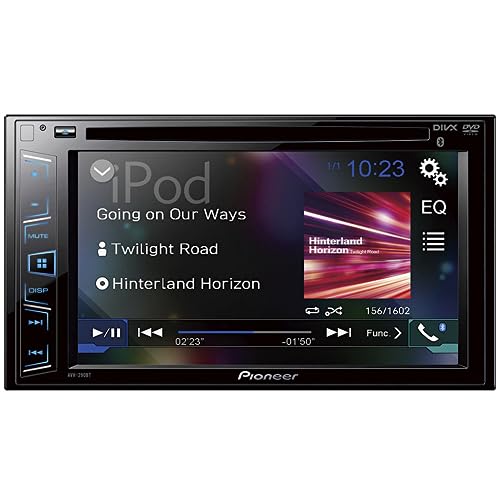 With Pioneer, you know you’re getting a quality stereo. Their AVH-290BT model is certainly no exception. Their sleek interface design makes it easy to use while on the move, and it looks great, too. Here’s why it made our list:

You may pay a little more for Pioneer’s brand recognition, but in return, they offer a well-designed, user-friendly experience with their AVH-290BT touch screen stereo. 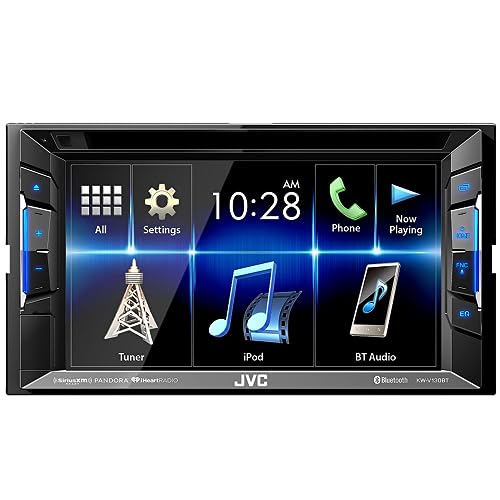 JVC is one of the oldest and most prolific car audio manufacturers and their experience shows in the KW-V130BT double DIN stereo. Its resistive touch screen makes it easy to use, and the 6.2-inch display allows all its features to be seen clearly for safe use on the road.

The selling point of this stereo by JVC is definitely the ability to load apps directly onto the unit. Any stereo that reduces the amount of time handling your phone gets the thumbs up from us because it’s safer and more convenient. 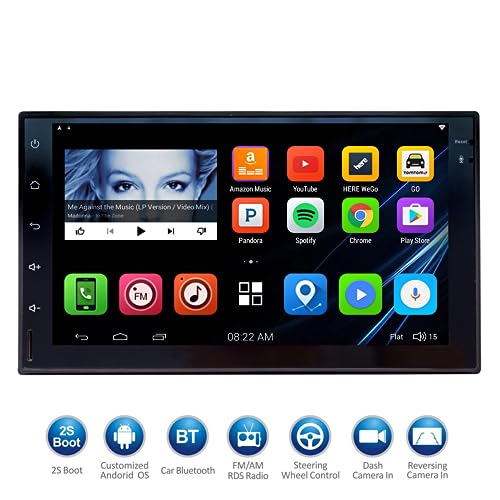 ATOTO is another “sleeper” company on our list. You may not have heard of them, but they produce high-quality stereo interfaces. This 7-inch double DIN touch screen has many features that set it apart from its competitors, especially for Android users, as it is designed for the Android OS:

The built-in Google tools are what got this ATOTO touch screen stereo on the list. Because of these tools, almost by default, the voice control and navigation systems are top-notch and user-friendly right out of the box. 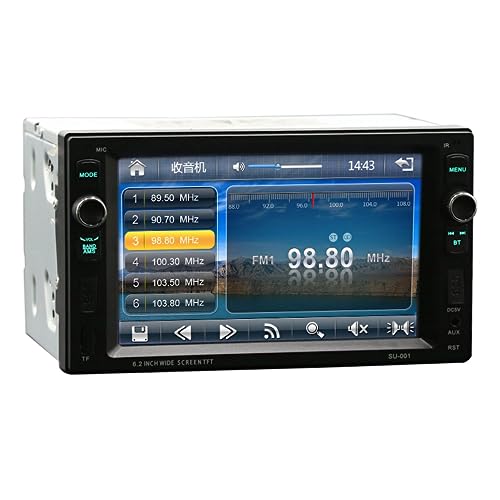 If you want to try out a stereo with all the bells and whistles without the huge price tag, we recommend this double DIN stereo by Xshop as a good option. Here’s why:

To be frank, the accessories on this touch screen stereo by Xshop are definitely not top-of-the-line, but they also don’t pretend to be something they’re not. If your shopping on a budget, you can get all the accessories you need with this unit in one bundle, and they can get the job done. 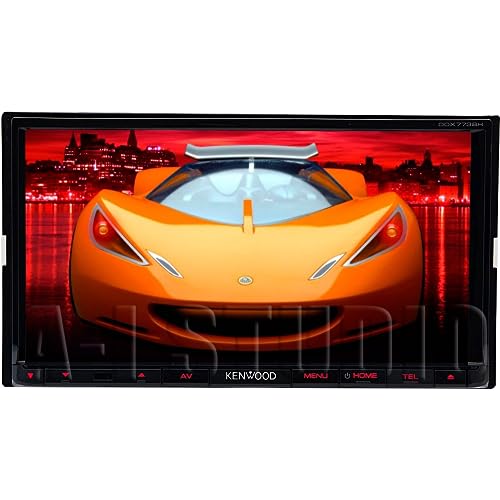 Almost the opposite of Xshop, we have Kenwood next on the list. They are another prolific car audio company, and the price reflects as much. However, you definitely get what you pay for with this manufacturer:

When you stereo shop with Kenwood, it’s pretty difficult to go wrong. If you have the room in your budget, the built-in media control and audio customization are well worth the price tag. 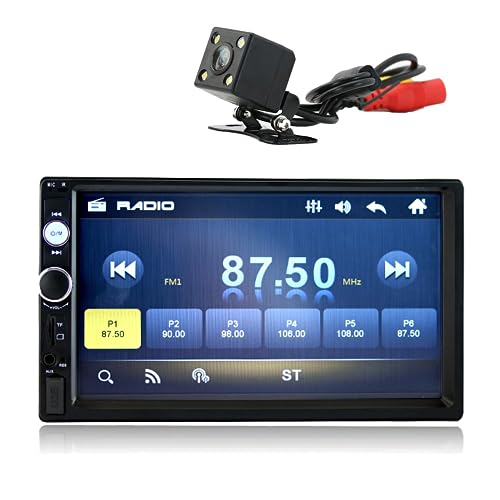 Kidcia’s take on a touch screen stereo is simple, but effective. This is another great option for those on a budget. Here’s why it made our list:

We’ve tried to include models of all different price ranges so that people on any budget can still get a luxury stereo experience. This touch screen model from Kidcia includes accessories that would normally cost extra and it certainly fits the bill for an effective and affordable stereo. 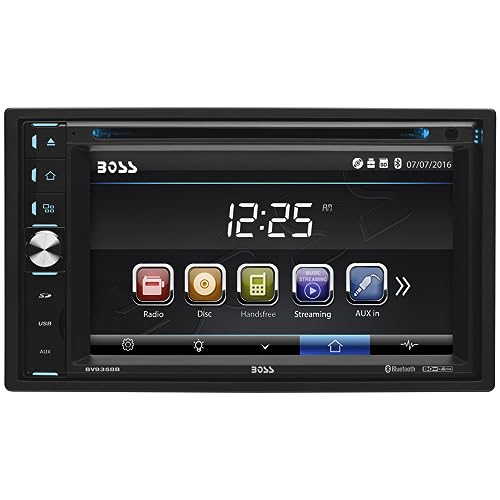 BOSS Audio makes our list several times, and for good reason. They are a well-known car audio company that knows how to build a sleek and affordable stereo system. Here’s what the BV9358B has to offer:

Available with camera options (additional charge), the BV9358B has all the features and audio sources to fit the needs of any user. 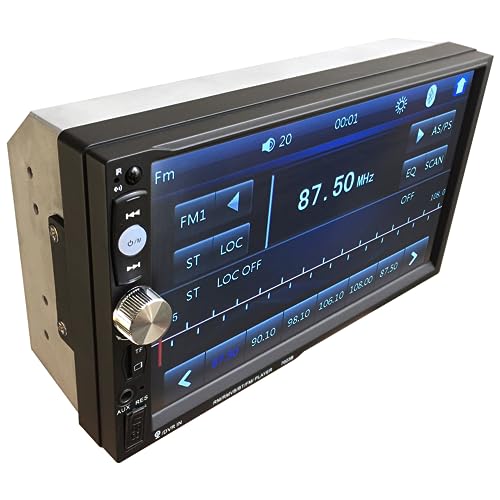 Bells and whistles are great, but for those of you who simply want to upgrade the way you listen to music, this Suncer head unit is definitely for you. It has all the features to give you your music fix, but a lot else:

Core Audio Sources – USB, AUX, and Bluetooth give you multiple ways to enjoy your media, but this unit does not have a CD player.

Clean and Simple Display – The screen on this Suncer unit is 7 inches and in high definition, giving you a clear and easy-to-use interface for safe use on the road.

This is another great option for those on a budget. It gets the job done when it comes to audio playback and doesn’t ask you to pay for features you don’t want or need. 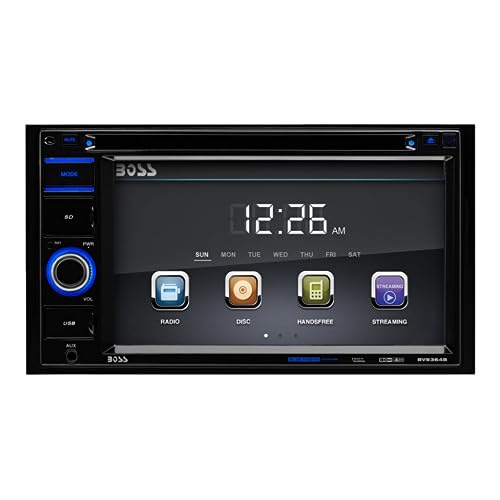 BOSS Audio is great at giving its customers a luxury experience in an affordable package. If you want a simple, straightforward touch screen car stereo, the BV9364B is definitely worth a look.

BOSS Audio is truly an “old faithful” when it comes to car audio. It has all the features you need to enjoy your media safely and conveniently while driving. 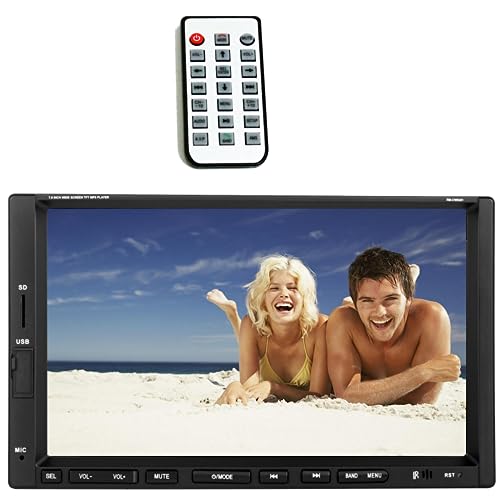 Ezonetronics’ take on the touch screen stereo is a beautifully minimalistic one. It has all the audio sources you need (USB & Bluetooth), but those are well hidden so the HD 7-inch screen is really all you can notice.

Ezonetronics makes a high-quality touch screen stereo experience that’s accessible to people with any budget. The HD 7-inch screen is definitely the standout feature in this model. 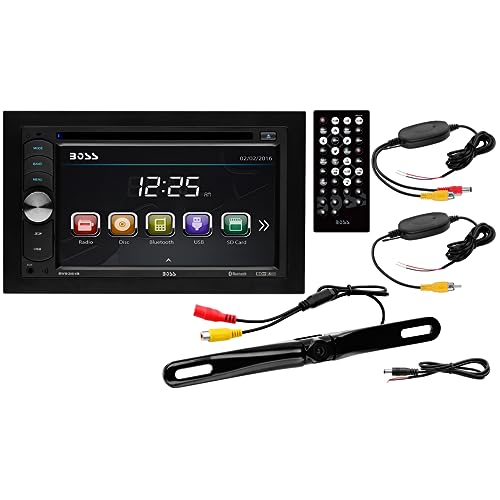 As you’ve probably noticed, you can’t talk about the best touch screen car stereo without talking about BOSS Audio. Their B9351WRC model comes with all the extra add-ons at a very affordable price.

The B9351WRC is a perfect example of how BOSS has made it on our list so many times. A clean and simple display combined with multiple media options makes this an obvious choice for our list. 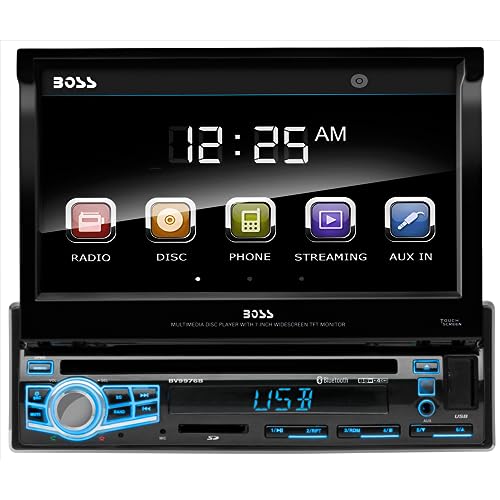 We promise this is the last BOSS Audio touch screen system on our list, but we wouldn’t add it for no reason! It is a more expensive model, but it has the features to back up its price:

BOSS Audio is a great middle ground for those who are willing to spend a little more money for their touch screen stereo. The added security of the detachable panel ensured a spot on our list for BOSS’s BV9976B. 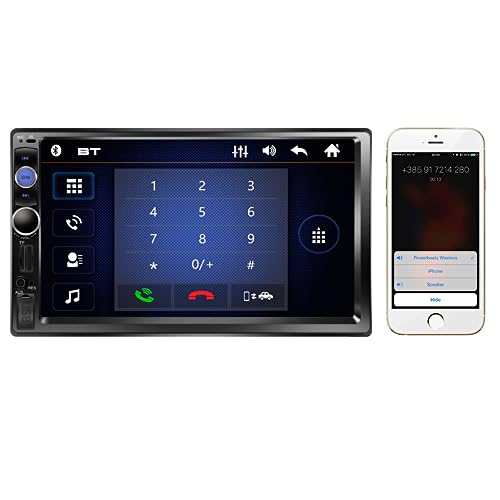 Last but not least, we have another budget option, this time from Regetek. Their simple interface on a 7-inch HD screen is hard to beat at its price point.

At such a low price, the video quality and expandability of this system make it a great choice for those on a budget or anyone who wants to try a touch screen stereo system before moving to a more expensive model.

Some recommended products may use affiliate links. ComparisonLab.com is a participant in the Amazon Services LLC Associates Program, an affiliate advertising program designed to provide a means for sites to earn advertising fees by advertising and linking to Amazon.com. Amazon and the Amazon logo are trademarks of Amazon.com, Inc or its affiliates.